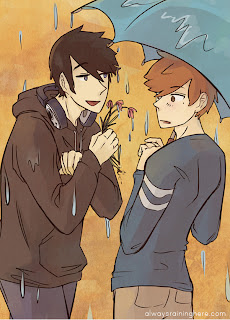 Carter Brooks, seventeen years old, has just come out of the closet. His first priority: get laid. Unfortunately, there's only one other attractive gay kid around. His name is Adrian, and he hates Carter.

The webcomic is a lot like The Less Than Epic Adventures of TJ and Amal, or Tripping Over You, in that it's light and amusing, and it's much more about the relationship between the two than the sex. (In fact, there are no explicit sex scenes.) There's lots of humor, and it's easy to fall in love with the immature-yet-mature teenage cast.

At 82 pages (as of this moment) it is incomplete. It updates once a week (so far, very reliably!) I would highly recommend this comic. It's not gonna change your life, but it's great.
Posted by Avery Shy at 10:17 AM